A while back we took a look with Underhood how insect companies are doing online on different social media platforms and the results were mostly appalling. The statistics show most companies are lazy to reach out to their audiences. You can find the article here. Underhood (underhood.co) is a Finnish startup that is measuring social performance of thousands of brands. Currently, there are about ten thousand companies, organizations or other brands analyzed daily on the service.

Another emerging new food business is Clean Meat, meat produced in bioreactors without the need of rearing and slaughtering of animals.  Clean meat- industry has a lot in common with insect-for-and-feed business: Both are high protein food sources that are offering a more sustainable alternative for traditional animal agriculture. Moreover, both are unknown to the wide audience and are facing the challenge of how to convince people of the safety and benefits their products offer.

Here below are 10 clean meat companies ranked by Underhood. Brands are analyzed by their social performance (language analysis, engagement numbers, and visibility) and given a social score. The scale is from 1 to 10 and you can click on any brand to see the full social analysis. The score is updated daily, the data shown below is from 11th of November 2018. 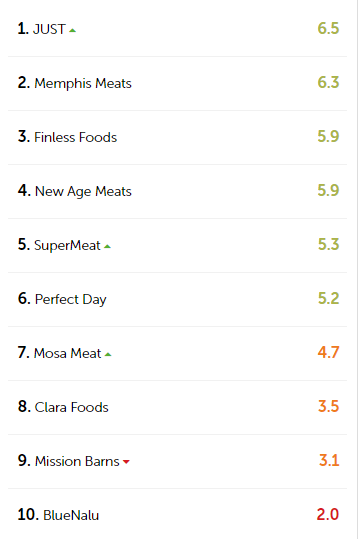 Underhood’s ranking as in 11th of November 2018

The two largest companies in the field are also the best-performing companies in social media. Scoring above six tells of a good social media strategy that is being executed consistently. Just is updating their social media channels almost daily and they have a good number of likes on Facebook; over 300.000. Looking at Just’s numbers it can be seen that Just is very consistent how to they are communicating, but what doesn’t work so well is that people are not reacting to the posts. 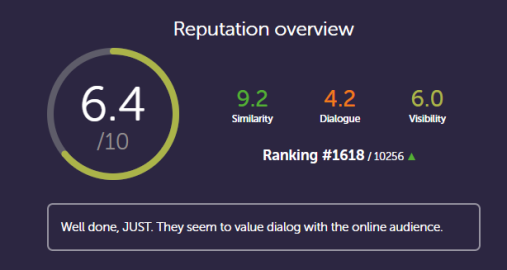 What is an interesting difference between Just and Memphis Meats is that Just is succeeding nicely in Facebook, while Memphis’s most successful posts are on Twitter. Twitter is nice and good to have, but Facebook is clearly the most important platform that should be priority number one.

Looking closer to New Age Meats- company interesting things can be found that others could learn from. From the top ten posts that have collected most likes, shares, and comments nine were done by New Age Meats. 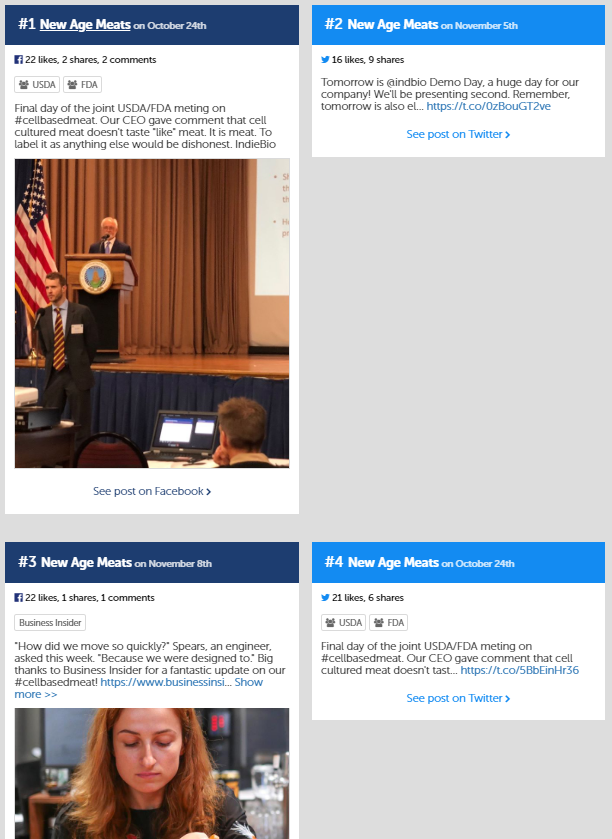 Where New Age Meats is not performing well is how they are responding to comments:

At the other end of the scale, things look pretty abysmal and it is obvious that social media is not considered important at all. Aleph farms- company doesn’t even have Facebook or Twitter- page.

As we see it, it is crucial that brands of this new industry get active on social. There are a couple of companies doing it well, but the majority are not doing their part. There is no way we can convince people to take on new food habits if we do not spread the word in the most personal media, meaning Facebook, Twitter, Instagram, and other platforms. It seems the industry players are not taking full advantage of the excellent and cost-effective opportunity to market their new and exciting products. The revolution needs to have evangelists!